Munich, 6 July 2020 - The COVID-19 pandemic has proven a decisive factor also on the German office leasing market, putting a damper on market activity. According to Colliers International, 1,247,200 sqm of office space was taken up in Germany’s 7 largest office hubs in H1 2020. Compared to the previous year’s record, this represents a decrease of 33%, with results also falling short of the 10-year average by 21%.

Wolfgang Speer, Head of Office & Occupier Services at Colliers International Deutschland, comments, “The impact of the pandemic has reached the German office leasing market. Nonetheless, we have not seen what could be called a true slump. With take-up in Q1 already down 29% yoy due to the economic dip at the end of 2019, the pandemic intensified this drop in H1 with a decrease of 33%.”

Germany is facing its worst economic crisis since the post-war years. The German government expects GDP to drop by at least 6.3% in 2020, which will affect export-oriented industries and, in particular, service-related sectors.

The outlook, however, is improving noticeably. Experts expect a strong catch-up effect in 2021, with the German government forecasting GDP growth of 5.2% and the ifo Institute even forecasting an increase of 6.4%. The ifo business climate index has also improved significantly since its low in April. Companies are taking a more positive stance in terms of the future as well, with business expectations at the end of June climbing to February’s pre-pandemic levels. Economic and labor market policies are also being put in place to mitigate the immediate impact of the pandemic.

“Many leasing transactions continued even during the lockdown, especially those involving large companies pursuing long-term strategies. We also saw leases being signed in the small and medium-sized segment once the initial shock had passed. Leases signed by tenants not impacted by the crisis, such as the public sector, had a significant impact on Q2 market performance as well,” Wolfgang Speer reports.

Berlin saw the least significant drop in take-up of 15%, claiming pole position with 331,000 sqm in take-up. The lease signed by Deutsche Rentenversicherung for 84,000 sqm at “Cule” was decisive. The Berlin leasing market proved quite robust with 13 leases signed for over 5,000 sqm, some of which also involved tenants from the public sector.

Munich followed closely in the ranks, posting 326,100 sqm in take-up, down 23% yoy. Three major deals for 10,000 sqm contributed to this comparatively small drop in take-up. Strongest demand came from the manufacturing industry and public administration.

Hamburg secured 3rd place with 174,900 sqm, down 45% from the previous year’s record result. This drop can be primarily attributed to the absence of large-scale leases for over 10,000 sqm. Market activity in H1 was dominated by small and medium-sized deals, accordingly, along with the usual broad sectoral demand.

Düsseldorf claimed 4th place with results down 33%. This reflects 141,000 sqm in take-up, particularly thanks to leases signed by the public sector. Consulting firms, which otherwise tend to have a strong presence on the Düsseldorf market, chose to wait on their decisions to lease.

The consulting firms located in Frankfurt also adopted a wait-and-see stance, with banks hesitant to sign as well. The city recorded 111,900 sqm in take-up, at 56% the steepest drop among the country’s top 7 office hubs. Many companies looking for large-scale space postponed their searches with no leases signed for more than 5,000 sqm as a result.

Cologne (85,000 sqm) and Stuttgart (77,300 sqm) came in at the back of the pack. Cologne posted a drop of 35%, which proved less than Stuttgart’s 45%, although 2019 was an exceptional year for the Stuttgart market. One major lease was signed in Cologne for space in the Airport/Porz submarket and Stuttgart recorded a major lease signed by a federal agency. Otherwise, medium-sized and small-scale leases dominated market activity in both cities.

In line with the subdued demand, vacancy rates were up slightly in all markets except Berlin. Vacancy in Germany’s top 7 cities increased by about 140,200 sqm in Q2 compared to the previous quarter, with the vacancy rate up 20 bps to 3.1%. The vacancy rate saw an even more moderate increase of 10 bps in terms of yoy results. 2.8 million sqm available for immediate tenancy at the end of June.

Berlin continued to post the lowest vacancy rate at 1.2%. Four other markets managed to remain below the “healthy” vacancy rate of 5% and are still characterized by a particularly severe shortage of space. Stuttgart posted 2.2% (+20 bps), Cologne 2.5% (+10 bps), Munich 2.7% (+30 bps) and Hamburg 2.8% (+20 bps). The vacancy rate in Düsseldorf also rose 20 bps to 5.5%, with vacancy rates in Frankfurt remaining stable at 6.9%. “For the time being, this confirms our assumption that we would see moderate increases in the vacancy rates in the country’s top 7 cities, all of which started the year out at a very low level. We expect vacancy rates in the Big 7 to increase to between 3.9% and 5.5% by the end of 2021,” comments Wolfgang Speer.

More than 1.6 million sqm of office space in the pipeline for 2020; pre-leasing rates remain high

The slight increase in vacancy can in part be explained by high pre-leasing rates at property developments. “Although more than 1.6 million sqm of new office space will be added to the market this year, 78% was already let by the end of June. Compared to this time last year where rates were at 87%, the drop in pre-leasing activity is noticeable. However, we expect pre-leasing rates to pick up again in H2 as demand continues to accelerate,” Wolfgang Speer states with confidence, adding, “Even though we are seeing more space being offered for sublet by companies that have put their expansion plans on hold, the scale of this activity in manageable.”

Looking at long-term trends, just under 5 million sqm of new office space is scheduled for completion in Germany’s top 7 office hubs by 2022. The pre-leasing rate for this space was up 5% to 60% compared to the previous quarter.

Prime rents proved stable compared to the previous quarter despite the impact of the pandemic. Frankfurt ranked first in terms of prime rents at €45.50 per sqm followed by Berlin (€39.90) and Munich (€39.50). Prime rents in Hamburg (€30.00) and Düsseldorf (€28.50) remained stable as well. Cologne and Stuttgart, on the other hand, swapped places. While prime rents were down in Cologne by 50 cents to a current €25.00, they were up 50 cents to €25.50 in Stuttgart.

“We expect the impact on office rents to be minor until the end of 2021 with adjustments of no more than 5% to 10% in the different cities. At present, however, the market is still showing no signs of these changes. Levels remained stable in the first half of the year and even showed the occasional upward movement,” Wolfgang Speer continues.

Outlook 2020: Effects of COVID-19 pandemic will continue to have noticeable impact on office markets

“The German office leasing market began to show signs of the pandemic’s impact in Q2. Despite lower demand, however, rents in Germany’s top 7 cities remained stable and, in some cases, even saw an upward trend. In addition, we are only seeing slight increases in vacancy, with vacancy rates still well below the 5% threshold in 5 out of 7 markets,” summarizes Wolfgang Speer.

However, it is still too early to predict the extent and length of the recession. “We assume that the delayed effects of the economic crisis will continue to influence office leasing market performance in the second half of the year. However, we are now past the phase of massive restrictions, and the unprecedented level of government aid will also help to boost the economy. Chances are therefore good that the market will be able to outperform the lows of the 2002 dot-com bubble and the 2009 financial crisis, in each of which take-up registered at 2.3 million sqm. We currently consider a year-end result of 2.7 million sqm feasible for 2020. That would put us only 22% short of the 10-year average of 3.5 million sqm,” Wolfgang Speer concludes. 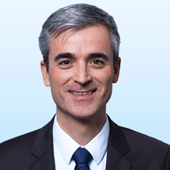 With a background of 20+ years professional experience in commercial real estate Wolfgang joined Colliers Corporate Solutions Germany in 2009 as Director Corporate Services, where he is based in the Munich office.

Since 2011 he is Managing Partner.

He is currently responsible for several Key Accounts and works successfully on several projects with a focus on serving the diverse real estate needs of national and international corporate clients and creating real value for the clients. He works actively with clients to develop an in-depth understanding of their key corporate real estate strategies, creating customized individual real estate solutions to meet their objectives and then oversee the execution and realization of those strategies on an on-going basis. Wolfgang also takes an active and pro-active part in the growth and development of the Corporate Solutions platform in EMEA.

Wolfgang has held several executive positions within an international corporate real estate company, where he was successfully involved in all kinds of real estate transactions and services.

Marc joined Colliers International in 2018 as a Research Analyst. He is responsible for monitoring and analyzing the national investment and letting markets with a focus on office, retail,  hotel and B&C cities. Marc supports capital market transactions and letting deals. He also writes market reports and works on client studies.