Andrew passed his Assessment of Professional Competence exam in 2010 to gain MRICS accreditation.

MRICS - Member of the Royal Institution of Chartered Surveyors 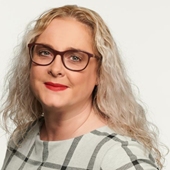 In November 2013 and with having 10 years previous experience with Halifax Estate Agency Joanne's moved to the Corporate Recovery Department as Personal Assistant to Jon Anderson, Director and the Surveyors within the team.

During her time in the company Joanne has gained experience within various departments and now provides PA support to the General Agency and Valuation Teams.

The subject property is an own door office suite comprising 2 floors of office accommodation. The ground floor comprises of a reception area, a number of meeting rooms, small kitchen and a disabled assisted WC.
The first floor includes a large open plan area, a number of meeting rooms, toilet and kitchen facilities. The office is finished to a good standard throughout to include; plastered and painted walls, air conditioning, carpeted floors,
perimeter trunking and exposed ceiling.

The property benefits from a shared passenger lift and on-site car parking.

Linen Green is a retail, leisure and office scheme, developed on part of the site of a former linen mill complex. The scheme hosts a range of local and national occupiers including Bedeck, Panache Shoes, Newbridge Jewellery and Synge & Byrne.
Linen Green is situated in Moygashel village, approximately 1 mile south of Dungannon town centre and less than a mile from junction 15 of the M1 motorway.
Due to its proximity near the M1 Linen Green is accessible from all over Northern Ireland and has a wide draw, with shoppers travelling from Belfast (40 miles), Lisburn (33 miles), Craigavon (18 miles), Enniskillen (45 miles) and Omagh (30 miles), which are all within 60 minutes’ drive time. It also has a large customer base in ROI, located only 50 minutes from Monaghan and only 2 hour’s drive from Dublin.
Easy to get to and quick to find, The Linen Green is a popular destination for shoppers and foodies. It currently offers a selection of eateries, shops and office space, making it popular with families, fashionistas and business people alike.

The Linen Green Complex, together with its surrounding land and buildings sits on a site extending to 11.35 acres.
A cycle and foot path connect Dungannon Park with Linen Green which is popular with families, runners, dog walkers and cyclists.
The scheme is served by approximately 650 car parking spaces across the site.
Linen Green is historically important within the Mid Ulster area as a former centre for the linen industry. Linen Green has a small museum and exhibition centre, which has just been recently rebuilt as a tribute to the areas industrial past. As a result Linen Green benefits from ‘Brown Signs’ (tourist signage) which give road directions from the surrounding area including from the M1. 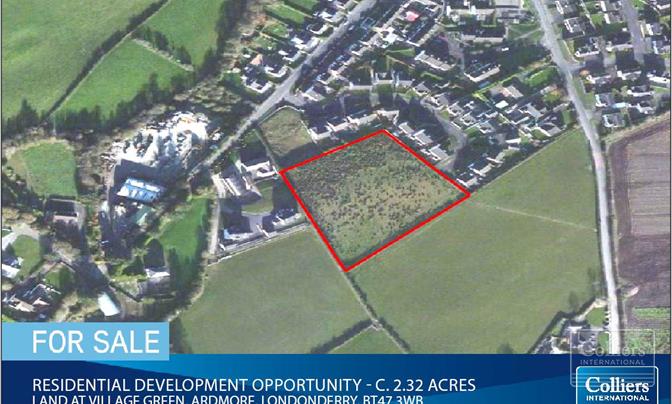 DESCRIPTION
The subject comprises a greenfield site of c. 2.32 acres within the Development Limit of Ardmore, the site is rectangular in shape and slopes gently towards the Ballybogie Road access is via the existing Village Green Development.

Additionally a revised site layout plan has been prepared and provides 34 no. units (3 no. detached, 18 no. semi detached and 13 no. townhouses).
The lands are located within the Development Limit of Ardmore under the Derry Area Plan 2011. The Lands are undesignated “Whiteland”

The subject property is a three storey retail unit of traditional construction, the property has recently been acquired by our client who intends to occupy the upper floors, therefore we are offering to let c. 6,049 sq ft (562 sq m) on the ground floor which will be available after an extensive refurbishment.
We have included a plan of the proposed layout to the rear of this brochure.

VAT
All prices are quoted exclusive of VAT, which may be payable.

EPC
The building has been rated as E-102 under EPC regulations.
A full copy of the EPC certificate is available on request. 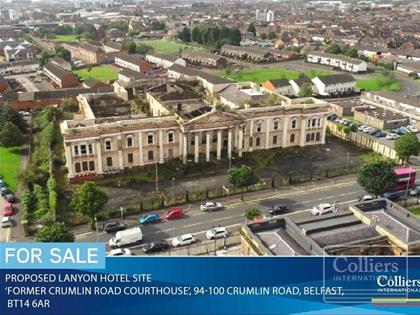 The Property comprises the former Crumlin Road Courthouse which is an iconic building in Northern Ireland being the location for many high profile trials during the Troubles.
It comprises an imposing and impressive two storey Grade B+ listed building constructed in 1840 in a Classical style with extensive symmetrical entrance front incorporating a hexastyle Corinthian portico.
The building stands as one of the grandest examples of its type in Northern Ireland, and together with the Gaol opposite, forms part of a very important architectural group.
The property is accessed directly from Crumlin Road and has former car parking areas to the side and rear. The property has been vacant for a number of years and requires substantial refurbishment due to fire damage.
In total the site extends to approximately 1.9 acres (0.77 hectares).

Planning permission for a change of use and the development of the property as a hotel was granted in June 2018.
When complete the hotel’s trading areas would comprise; an entrance lobby with reception and lounge bar providing seating for 50 people on the ground floor, 142 cover restaurant and function suite with capacity of around 300 on the second floor, with a rooftop bar/terrace effectively at third floor level.
In addition, there would be 55 bedrooms, a swimming pool, gymnasium, six beauty treatment rooms and associated changing facilities and WCs located at basement level.

The subject is designated for ‘mixed use’ purpose and is incorporated into a development site (BT003) that also includes Crumlin Road Gaol and Girdwood Barracks. The property benefits from full planning permission for a hotel development and is an iconic well known land mark building steeped in architectural social history situated opposite a very popular tourist attraction. Potential exists to explore other development options including residential and cultural uses (subject to planning).

The property comprises a Grade B2 Listed Building originally constructed in the late 1950s. The property is arranged over five storeys and formerly comprised offices on all floors.
The ground floor benefits from its own access to Waring Street at the front of the property with the upper 4 floors accessed from the west side of the building. The external walls are of prefabricated concrete cladding with a steel and reinforced concrete structure.

The property comprises a broadly level site which is shown for identification purposes only outlined in red on the Spatial NI extract.
A portion of the property’s demise is occupied by the Royal Ulster Rifles Museum (hatched red on the extract) and has been sold off on a long lease to The War Department (999 years from 1 May 1962 at a peppercorn rent), with a right of pedestrian access from Waring Street.
The net site area is approximately 0.29 acres (0.12 hectares), notwithstanding the right of way over the laneway to Waring Street.

The subject property has been recently constructed and extends to c. 1,216 sq. ft. The unit is completed to a developers shell specification with capped services. Externally the building is finished with a painted render and electric roller shutter doors. Dream Pods operated by Dream Apartments occupy the upper floors of the building. The unit may be suitable for a variety of uses subject to the necessary consents.