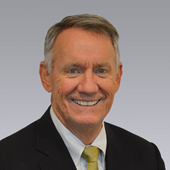 Doug is a lifelong Kansas City resident. Doug joined the current firm at its founding in 1989. Today, he is Executive Vice President, and an owner and member of the Executive Committee of the Colliers International | Kansas City office. He specializes in development of mixed-use projects which include retail, office and multifamily specialties. Doug has also developed more than 300,000 square feet of medical offices, surgery centers, and hospitals, including clients such as St. Lukes Health System and The University of Kansas Health System. Doug’s other projects include Mission Farms, a 550,000 square foot mixed-use project in Leawood, Kansas; Highlands Village, a 575,000 square foot mixed-use project in Overland Park, Kansas; and Indian Creek Campus in Overland Park, Kansas, a 400,000 square foot office and medical park developed and owned by partnerships organized by Doug over the last 15 years.

School of Business – University of Kansas