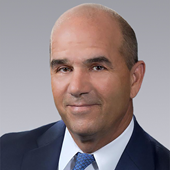 As a capital markets specialist, George Stecz has acquired an extensive background in commercial real estate dispositions, acquisitions, and development. During his nearly 25 year career in commercial real estate he has consummated office, industrial and retail dispositions/acquisitions totaling over $1.8 billion in aggregate value in Central Ohio.

Prior to joining Colliers International, George previously served as Senior Managing Director of Cushman & Wakefield while leading the Investment Sales team in sales of Institutional and Private Equity firm assets. Prior to joining Cushman & Wakefield, George was a Managing Member of CBRE’s Columbus Investment Properties team. Prior to initiating his brokerage career, George was a key member in Ohio for Duke Realty as Development & Acquisition Controller. During his Duke tenure, George was an integral member of a team in financing and developing over six million square feet of office, industrial, and retail product in addition to $100 million in acquisitions.