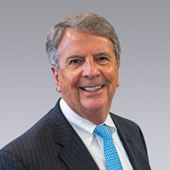 I am the President and Chief Executive Officer of Colliers International | South Carolina, the state’s largest commercial real estate firm. As CEO of Colliers’ South Carolina operations, I am responsible for the administration of the firm, including finance and human resources and its service platforms, including commercial real estate brokerage and management services, corporate solutions, project management and healthcare solutions. I also devote considerable time to client development.

Along with our senior management team, I have strived to establish a solid foundation from which our Colliers staff can grow and enjoy success in their careers. I strongly believe the Colliers | South Carolina platform is unparalleled in the commercial real estate industry in our markets and has played a huge role not only in the success of our company, but most importantly, the accomplishments of our professionals and their clients.

I am humbled to have received several recognitions over the years, including Washington and Lee University’s Distinguished Alumni Award and selection as an Honorary Member of ODK. In 2008, an award in my name was created by the South Carolina Independent Schools Association to recognize volunteer leadership. I was also honored in  2013 by the United Way of the Midlands as the “Humanitarian of the Year” and in 2014, I received the Tom Richardson Award from my colleagues of Colliers International. In 2016, the Greater Columbia Chamber of Commerce selected me as their Ambassador of the Year.

Community is one of Colliers’ core values and thus I am actively engaged in leadership roles in numerous community and statewide civic organizations, including serving as chairman of the Midlands Business Leadership Group and as a former board member and chair of Providence Hospital. I am a founding board member of “Salute from the Shore”, a patriotic South Carolina initiative to honor America’s military on the 4th of July.

I previously served as a board member and chair of the South Carolina Independent Colleges and Universities and the South Carolina Independent Schools Association and Hammond School, as well as serving as a trustee of Washington and Lee University in Lexington, VA. I am a former member of the Boards of the South Carolina Chamber of Commerce and the Greater Columbia Chamber of Commerce, as well as Chairman of the Board of the United Way of the Midlands. I was also a member of Young Presidents Organization (YPO). In addition, I was a founding Board Member of Transitions, Columbia’s homeless service center. Through my involvement with Midlands Business Leadership Group and the Columbia Chamber, I have served on the “Cost of Doing Business,” the “Business Friendly” Task Forces, and chair the Economic Development Task Force, each of which are focused on enhancing the economic and business environment in the Midlands of South Carolina.

I hold an undergraduate degree in economics from Washington and Lee University and graduated from the University of South Carolina with a Master of Business Administration in 1974. Prior to joining Colliers in 1993, I was the President and CEO of a publicly traded statewide bank holding company. I am currently a board member of the Jackson Companies of Myrtle Beach, SC, a diversified recreational, entertainment and real estate development company, and a member of the Board of the Certified Development Corporation (CDC), a South Carolina banker-affiliated SBA lender. I was formerly a member of the Board of Continental American Insurance Company that was subsequently acquired by Aflac.