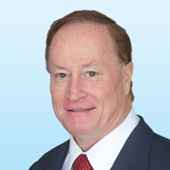 Mike serves as Senior Vice President for Colliers International Raleigh, focusing on retail, land and investment sales. He comes to Colliers International with an extensive background in commercial real estate, having worked in principal roles both privately and for local and national organizations. He started his career with Marshalls, Inc. and then PetSmart, Inc., reaching regional and national directorial positions. At these companies, Mike approved many sites, eight to ten sites every six to ten weeks at PetSmart and conducted 36 openings a year at Marshalls. Mike settled in Raleigh, where he joined local companies, Kane Realty and Retail Strategies of N.C., working as a partner/broker and principal, respectively. He managed an extensive amount of development projects, leases and represented tenants. Mike later began to work as the principal and owner of McAnarney Real Estate and aided developers and tenants in discovering Southeastern opportunities and negotiating contracts for land acquisition.

University of Kansas, Lawrence, K.S. Masters of Urban and Regional Planning, with concentrations in Transportation, Public Finance, and Real Estate (1984)

Bachelors of Environmental Land Use (1981)