In my 15 years advising industrial real estate clients, I’ve learned to put myself in the client’s shoes and help them make decisions as though it was my money and my business on the line. I pride myself on my local market knowledge and my ability to provide my clients clarity so that they can make the best, most well informed decisions possible. I’ve been honored to have served my clients in over 500 transactions, worth more than $500,000,000 and totaling over 7,000,000 square feet.

In 2008, I became the youngest person in the state of Michigan to hold both the CCIM (Certified Commercial Investment Member) and SIOR (The Society of Industrial and Office REALTORS®) designations. I also have served as an expert witness before the Kent County Circuit Court and the Michigan Tax Tribunal, representing a Fortune 500 manufacturing client.

I am a graduate of Calvin College, with a Bachelor of Arts in Business Finance.

I am currently using my expertise and market knowledge to market the West Michigan portfolio of CORE Realty Holdings, one of largest industrial property owners in the region.

Represented a Chicago based investor in the sale of a 191,000 SF manufacturing facility at 900 Hynes Avenue SW to Founders Brewing Company for their second production location.

Represented a court appointed bankruptcy trustee in the sale of a 28,000 square foot, modern manufacturing facility in Grandville, MI, as well as the buyer of the facility, Reliable Automation, a rapidly growing custom machine building company.  Steve’s intimate knowledge of the market allowed both parties to achieve their goals.

Represented CompX corporation, an international furniture components company with the disposition of their 140,000 square foot manufacturing plant in Byron Center, MI.  Steve sold the facility to Grand Rapids Chair Company, which brought millions in investment and hundreds of jobs to the community.

Represented Lumbermen’s Inc. in the purchase of a 198,000 square foot distribution facility while simultaneously relocating two tenants from the building into new facilities with long term leases.

Represented G&T Industries in the build-to-suit and 10 year lease of a new 204,000 square foot manufacturing facility, the largest industrial development in West Michigan in 2007.

Represented International Transmission Corp. in the sale of a new, fully-functional disaster recovery control center, which was eventually sold to Amway Corporation as an off-site data center.

“Steve has consistently represented my best interests over our years of working together.  He has continued to find excellent tenants for us to partner with, while sometimes advising me against a decision that would have earned him a fee.  I count him as a trusted advisor and I look forward to many more years of mutual success together.”

“Steve, thank you for meeting with me at your office on short notice. To say the least, I was extremely impressed with your professionalism and the extent to which you were prepared for the meeting.  We accomplished more than I had expected in a first meeting.”

“Steve Marcusse is one of the best SIOR’s I’ve worked with anywhere in the country. His professionalism and level of service are outstanding.”

Coming 4th quarter of 2019! West Michigan's finest light industrial/business park is breaking ground and scheduled to be ready for occupancy late November of 2019. 5199 68th Street SE is the first of four brand new, super-efficient completely precast buildings, featuring 24' internal clear heights, 67' by 48' column spacing, ESFR sprinkling, one loading dock and one drive in door per 6,480 SF bay, lots of windows for natural light and flexible office layouts, and nearly 1000' of frontage along 68th Street SE, just west of Broadmoor Avenue SE, and less than half a mile from the new Amazon fulfillment center at Patterson Avenue SE. Come be a part of West Michigan's new standard in multi-tenant industrial suites-the Crossroads Commerce Park. 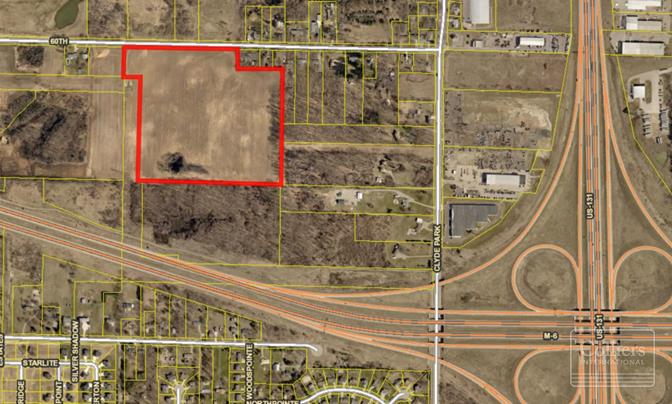 This property is 30.70+- acres and is located in Byron Center Township. The property is Master Planned Industrial and has municipal sewer and water near the site. Call listing agent for additional information. 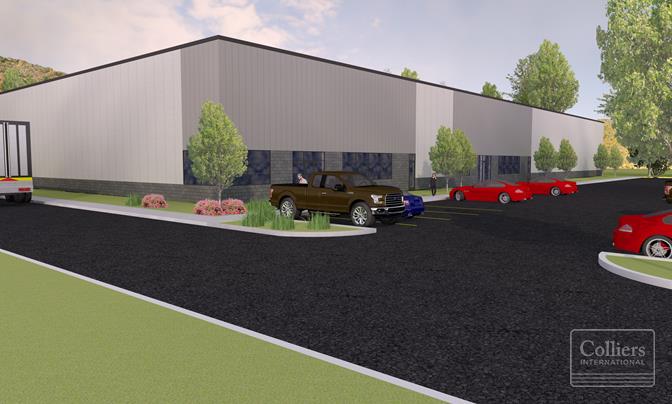 Coming Spring 2021! State of the art manufacturing and distribution facility located on Broadmoor Ave (M-37), just two miles north of the M-6 interchange. This facility features lease spaces from 18,000 to 52,000 SF with office space custom built to suit. 47 car parking spots are planned but and additional can be added. The IMP wall system building will have 26’ minimum inside clear height, ESFR fire protection, ten (10) loading docks, and parking for up to twenty nine (29) 53’ trailers. With its ideal location in the heart of West Michigan’s largest industrial sub-market and its latest energy efficiency technology, this facility will make an ideal place for the region’s best tenants to call home. 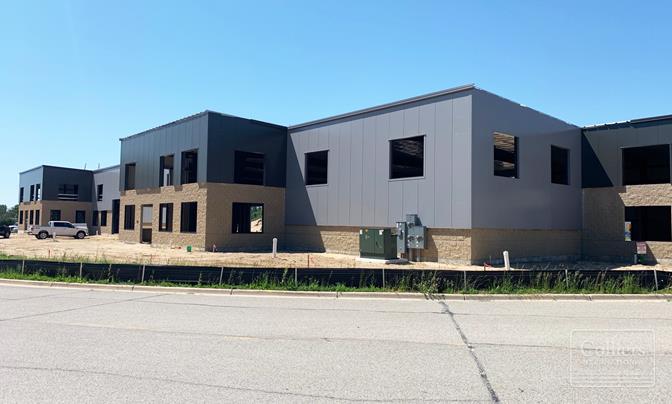 State-of-the-art under construction industrial facility near Downtown Grand Rapids will feature two 7,000 SF suites for lease, each with a dock, drive-in-door and 7% office buildout. Clearspan suites feature 22’-26' clear heights, ESFR sprinkling and 200 amps of 3-phase power with more available. Entire parking lot will be concrete. Owner is retaining a portion of the building for their operation. There is not a more central location available in West Michigan than this facility which is less than 1/2 mile from the Burton Street on/off ramp to US-131. Fantastic corporate presence. 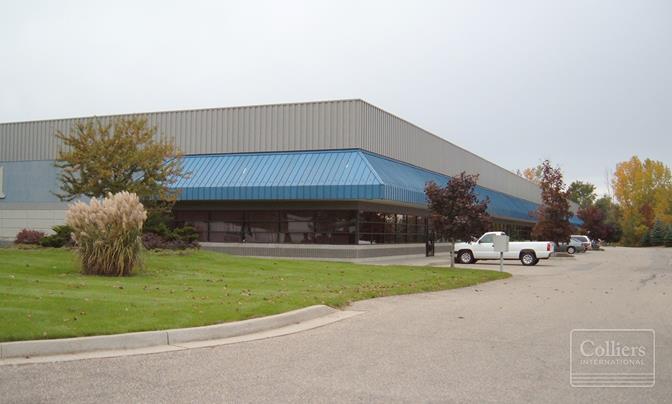 This suite for lease is just off of the US-131 & 76th Street exit, one mile south of M-6. It features newly renovated office space, with three (3) private offices and a conference room. The warehouse is 22’ clear with a 14’ by 14’ drive in door and immediate access to a loading dock. The suite has a 400 amp panel of 480v power as well as a separate 250 amp panel. There are new florescent lights and a 1,500 SF mezzanine space which is free. Car parking in front and truck parking, outside storage in back.

Class A industrial flex space close to US-131, M-6, and Gordon Food Service headquarters. The space offers two (2) docks, two (2) grade level doors, 6,400 SF of office and 200 amps of power. This space is one of the finest, class A flex spaces in West Michigan. 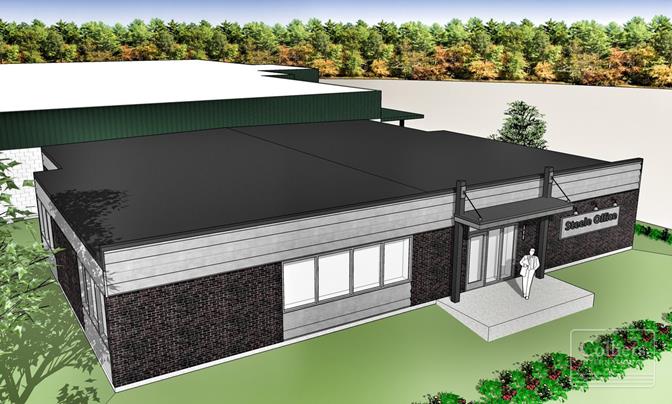 Recently renovated manufacturing space for lease near US-131 between Hall and Burton. The space features two large drive in doors, 1,500 SF of office, 18'-21' ceilings and a 5 ton crane. The space has nice office space built in 2016 and features drive-thru capability. 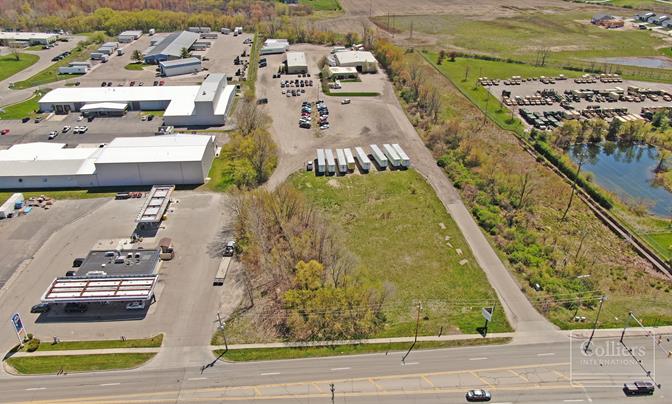 3800 & 3776 Three Mile Road property located in Walker, Michigan, represents an opportunity to own two industrial buildings, fully leased to Penske Trucking and MI Prime Logistics, an Amazon delivery partner. Each building offers a surplus of truck and trailer parking, an asset to both tenants and an amenity that is not easy to fi nd in the market. Both leases (four - six years remaining) are true NNN in nature, and offer a Landlord a care free investment opportunity into industrial distribution service facilities that will continue to be in demand as our supply chain and consumer habits evolve. 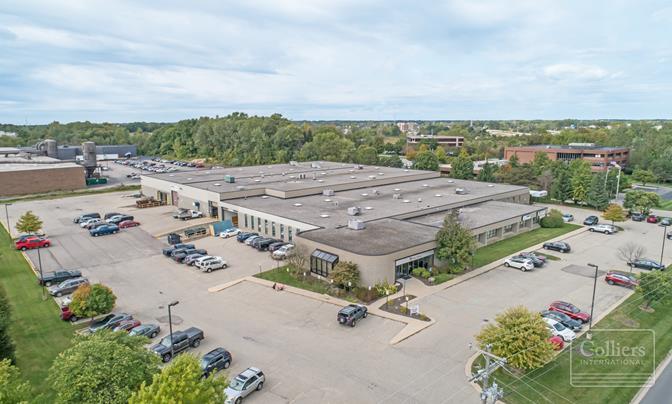 This property’s unparalleled location on Kraft Ave just south of I-96 is just the beginning of it’s long list of unique attributes. This all brick and block facility features 75% fully climate controlled office / tech space, with huge open areas for showroom, call center, open office, clean room production, or extremely clean manufacturing. The building has 4,000 Amps of power, multiple fiber optic communication access points, tons of natural light throughout the interior, 181 parking spots, four (4) loading docks and two (2) drive in doors. Baker Perkins also leases approximately 28,000 SF and has been a tenant for 10+ years. There is not a better location or property available on the market today for users seeking a first class high tech office / flex / light manufacturing facility with built in rental income and long term growth potential. 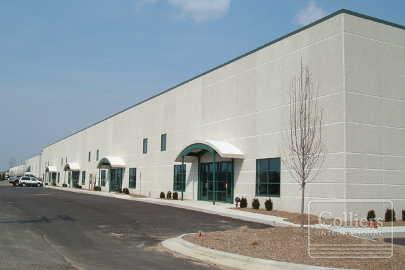 Class A industrial flex space close to US-131, M-6, and Gordon Food Service headquarters. The space offers five (5) docks, five (5) grade level doors, 2,000 SF of office and 1,000 amps of power. This space is one of the finest, class A flex spaces in West Michigan. Landlord is open to extension beyond sub-lease term depending on the tenant. 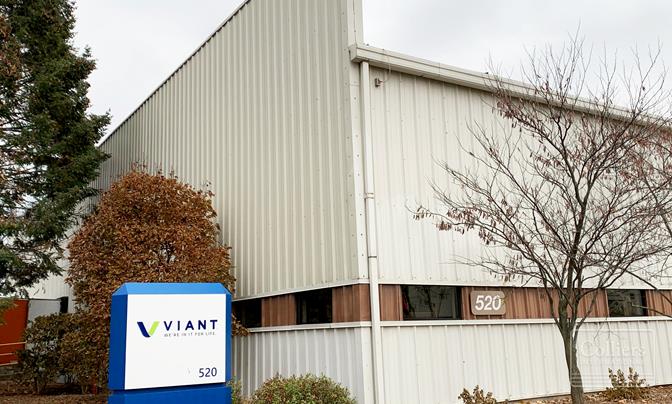 Excellent manufacturing facility available for long term sublease near downtown Grand Rapids. This former Viant Medical facility is located next door to Grand Valley State University as well as other medical device manufacturing facilities in this rapidly changing part of downtown. The facility offers clear span production area with 20’ to 24’ clear heights, 800 Amps of power with redundant diesel generator back up, seven loading docks and one drive in door for easy throughput, and ample parking with 109 onsite spots in an area where parking is becoming a premium asset.

Site 36 Industrial Park is well positioned for immediate development by Franklin Partners.  This vast, 92-acre park is the premier destination for large scale, advanced manufacturing in West Michigan.  Site 36 offers over 80 acres of contiguous, shovel ready manufacturing infrastructure, including direct access to US-131, in the heart of the metro area.  With a total population of 300,000 people within 5 miles of the site, including 29,750 people currently employed in manufacturing, Site 36 is located in the heart of a talent rich, hard-working community.
Located in the City of Wyoming, Site 36 is serviced by nearly every major mode of transportation. This site has immediate access to a major north/south highway, US-131, direct freight rail service, and is eight miles from Gerald R. Ford International Airport.  The Industrial Park offers its own Consumers Energy sub-station with up to 41MW of dedicated power at T-1 rates, and can accommodate new facilities from 100K SF up to 1M SF.  High-pressure natural gas and ample municipal water and sewer are also available on site.  Site 36 has two existing rail spurs into the site, which are directly adjacent to the Grand Elk Railroad yard.  The Grand Elk connects to three class one railroads in Elkhart, Indiana, approximately 100 miles south of the site.

With 20 years of industrial development experience in West Michigan, Franklin Partners understands large manufacturing users and is the ideal development partner for state-of-the-art manufacturing facilities.  The City of Wyoming is motivated to attract new jobs and can offer significant state and local tax incentives to attract large users to the site.  Franklin Partners and Colliers International bring industry expertise to simplify and expedite the entire process.