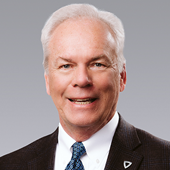 Terry has over 40 years of experience working in the commercial, industrial, and investment markets in Middle Tennessee and Southern Kentucky. In 2013, Terry served as the International President of SIOR, a 3,000-member organization comprised of the most knowledgeable, experienced, and successful office and industrial brokers. While serving as president, Terry traveled the world representing organization members. This experience provides Terry with a vast network of key brokers and investors who are active in the US and internationally.

Terry was the first Nashville employee of Coldwell Banker Commercial in 1980. In 1983, he moved to The Mathews Company as Vice President of Sales and Principle Broker of RCM Realty. In April of 2000, Terry and his partner Bert Mathews merged RCM Realty with Nate Greene and Tony Vaughn (NAI Taylor Vaughn and Greene) to become NAI Mathews Partners. In 2010, NAI Nashville became Colliers International.

In Terry’s career, he has led transactions ranging from small office/warehouse leases to complicated sale-leasebacks such as Baldor Electric, a 670,000 square-foot facility in Cookeville, Tennessee. Terry has always provided the same caliber of professionalism and expertise to all clients.