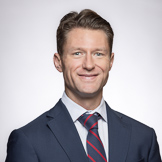 Zack Ficke serves as Vice President and is a member of the Institutional Capital Markets Group of Colliers International.  Mr. Ficke focuses on the acquisition, disposition and capitalization of CTL, GSA and NNN properties and portfolios throughout the country. Mr. Ficke’s primary focus is representing sellers of investment grade assets primarily leased to the federal government and other national credit tenants.  Throughout Mr. Ficke's career he has closed transactions valued at more than $1,000,000,000 in 44-states and currently helps in assisting the business development efforts across the CTL verticals serviced by the team.

Each agent within the team has a clearly defined specialization which allows the team to hyper-focus in various niches within the CTL, GSA and NNN market. 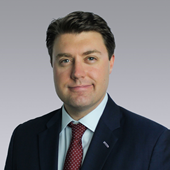 Geoff Ficke serves as Executive Vice President and is a member of the Institutional Capital Markets Group of Colliers International.  Mr. Ficke focuses on the acquisition, disposition and capitalization of CTL, GSA and NNN properties and portfolios throughout the country. Mr. Ficke’s primary focus is representing sellers of investment grade assets primarily leased to the federal government and other national credit tenants.  Throughout Mr. Ficke's career he has closed transactions valued at more than $1,000,000,000 in 44-states.

Mr. Ficke leads a 10-person team thats success has hinged upon the relationships formed with private investors, developers, institutional investors, public REITs, private equity funds, off-shore investors, syndicates, as well as brokers from other national and regional brokerage firms. This is a testament to the teams willingness to collaborate with other brokers as well as the relationships fostered throughout the country.  Each agent within the team has a clearly defined specialization which allows the team to hyper-focus in various niches within the CTL, GSA and NNN market. 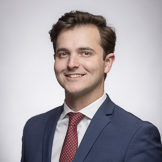 offi ce of Colliers International. Jack is a member of the Net Leased Group and Industrial Services Group. Jack’s

with a hyper-focus on equipment rental properties nationwide. Prior to working with Colliers, Jack was the business

development & acquisition manager for a private investment group based out of Los Angeles, where he focused on

the Kelley School of Business at Indiana University, and he prides himself on providing a consultative approach to 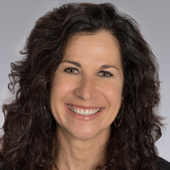 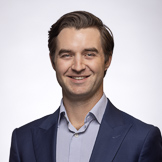 Chris Higbie is an Associate on the Capital Markets team in Dallas, specializing in healthcare investments.  His core focus is on acquisition, disposition, and capitalization of single-tenant dialysis centers and multi-tenant medical office buildings nationwide.  Prior to joining Colliers, Chris was in the New York City area where he lead a solutions practice in management consulting, providing logistic and financial guidance to fortune 500 companies.  He brings this same consultative approach to his real estate advisory to develop unique and creative solutions for each client. 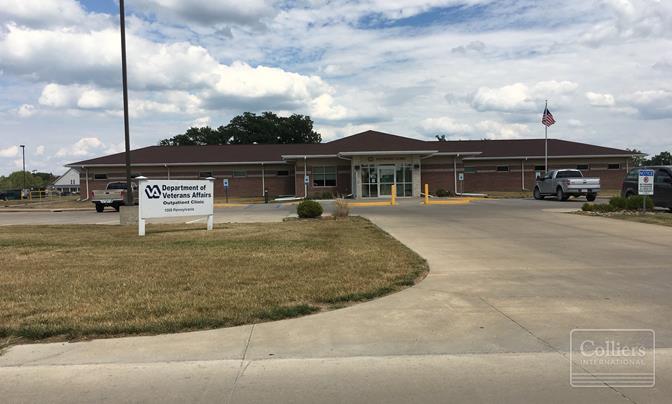 Colliers International is leased to present an opportunity for this professional building located at 1009 E Pennsylvania Ave., Ottumwa, Iowa. This offering is a unique opportunity to acquire a vacant, modern professional office building below replacement cost. The subject is ideally located across the street from the Ottumwa Medical Clinic, which is connected to the Ottumwa Regional Health Center, a 101-bed medical hub.

This was a build-to-suit in 2009 for the Veterans Administration as the Ottumwa Outpatient Clinic and conforms to the Veterans Administration strict building standards. The property consists of 8,729 square feet, 110 parking spaces, and is currently single tenant occupancy, which may be reconfigured for multiple tenants. The building is ADA compliant throughout and includes a waiting room, lab, eight exam rooms, treatment room, triage room, and office space, janitorial room, and public and private bathrooms.

Ottumwa is in South Center Iowa and is split into northern and southern halves by the Des Moines River. Top employers in the area include JBS Swift & Co, John Deere, Ottumwa Regional Health Center, and Dr Pepper Snapple Group are among the largest employers. 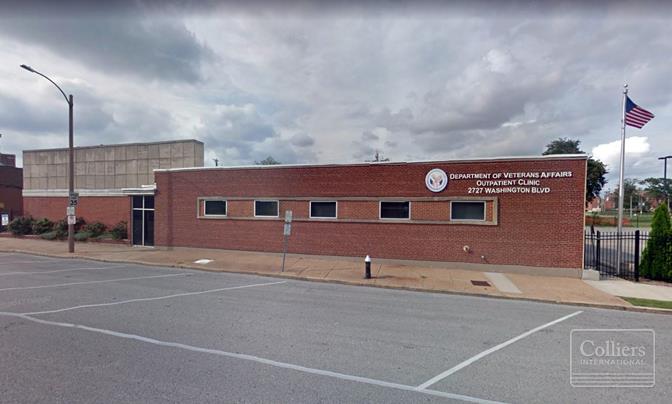 The VA is a government run military benefit system with Cabinet level status. It is the United States government's second largest department, after the United States Department of Defense. The VA employs nearly 320 000 people at approximately 1,700 Veterans Affairs medical facilities, clinics, and benefits offices and is responsible for administering programs of veterans benefits for veterans, their families, and survivors. The VA is headquartered in Washington, D.C.

St Louis is an independent city and major U S port in the state of Missouri, built along the western bank of the Mississippi River, which marks Missouri's border with Illinois. The city had an estimated 2018 population of 311,404 and is the cultural and economic center of the Greater St. Louis area (home to 2,916,447 people), making it the largest metropolitan area in Missouri and the 19 th largest in the United States. The economy of metropolitan St. Louis relies on service, manufacturing, trade, transportation of goods, and tourism Its metro area is home to major corporations, including Anheuser Busch, Express Scripts, Centene, Boeing Defense, Emerson, Energizer, Panera, Enterprise, Peabody Energy, Ameren, Post Holdings, Monsanto, Scottrade, Edward Jones, Go Jet, Purina and Sigma Aldrich. Nine of the ten Fortune 500 companies based in Missouri are located within the St Louis metropolitan area. This city has also become known for its growing medical, pharmaceutical and research presence. St Louis has 2 professional sports teams the St Louis Cardinals of Major League Baseball and the St. Louis Blues of the National Hockey League. The city is commonly identified with the 630-foot (192 m) tall Gateway Arch in the city's downtown. 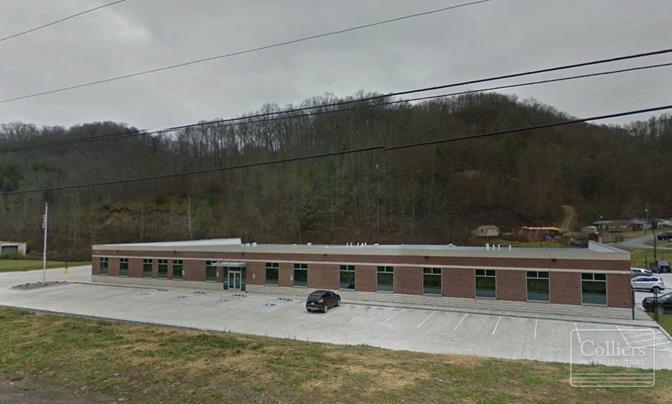 Colliers International is pleased to present an investment opportunity, for the Mine Safety Health Administration (MSHA) office located at 4499 Appalachian Highway, Pineville, West Virginia. This 2016 build-to-suit for MSHA is the newly created, critical mission District 12 Office that’s a consolidation of three field offices and reallocation of District 4 due to the increase in coal production in southern West Virginia. District 12 covers Cabell, Lincoln, Logan, McDowell, Mercer, Mingo, Wayne, and Wyoming counties coal mines. It is also home to the Logan and Pineville field offices.

CONSOL Energy has commenced the development of a new metallurgic coal mine in Wyoming County that is expected to produce more than 600+ thousand tons per year of high-quality,
low-vol coking coal production. The mine is projected to be in full production in 2021 and create new jobs in the area. Global steel production is dependent on coal, as 70% of the steel produced uses coal, of which metallurgical coal is a vital ingredient.

The U.S. Department of labor’s MSHA helps to reduce deaths, injuries, and illnesses in the nation’s mines with a variety of activities and programs. The Agency develops and enforces safety and health rules for all U.S. mines, and provides technical, educational and other types of assistance to mine operators. MSHA works cooperatively with industry, labor, and other Federal and state agencies to improve safety and health conditions for all miners in the United States. 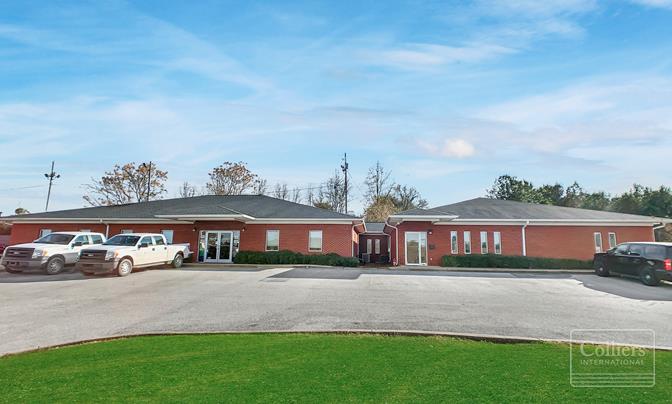 Colliers International is pleased to present an investment opportunity, 6050 Mimosa Park Circle, Tuscaloosa, Alabama. Developed in 2006, this two-tenant office building is 100% leased to the State of Alabama Law Enforcement (ALEA), and Battelle Memorial Institute. The property has additional annual revenue generated from an advertising board that is leased to Lamar Company.

The mission of the Alabama Law Enforcement Agency is to efficiently provide quality service, protection, and safety for the State of Alabama through the utilization of consolidated law enforcement, investigative, and support services. This Tuscaloosa office has 12 law enforcement investigators and the facility has secure storage of confiscated weapons and drugs.

Battelle’s mission in Tuscaloosa manages operations in Talladega National Forest, Dead Lake, and Lenoir Landing/Choctaw National Wildlife Refuge. Battelle Memorial Institute is a private nonprofit applied science and technology development company headquartered in Columbus, Ohio. The institute opened in 1929 but traces its origins to the 1923 will of Ohio industrialist Gordon Battelle which provided for its creation. Originally focusing on contract research and development work in the areas of metals and material science, Battelle is now an international science and technology enterprise that explores emerging areas of science, develops and commercializes technology, and manages laboratories for customers.

Tuscaloosa Alabama is in west-central Alabama and is home to the University of Alabama, Stillman College, and Shelton State Community College. Mercedes-Benz built its first automotive assembly plant in North America in Tuscaloosa County. Tuscaloosa serves as a regional center for industry, commerce, healthcare and education in West Alabama. 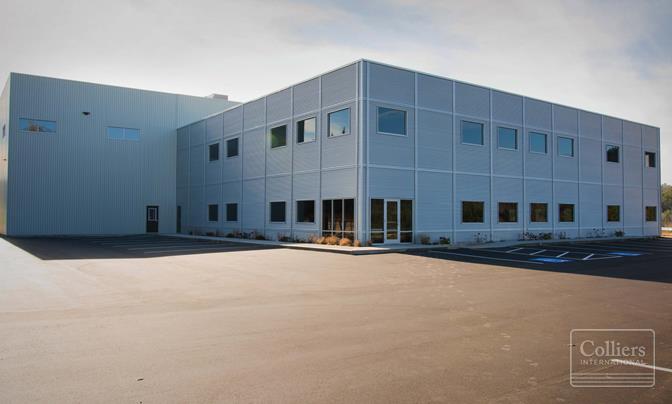 The Tender Corporation is a 117,250 square foot office/manufacturing center. The building is leased to Tender Corporation with a 10-year primary term and two five-year renewal options. The lease is on a double-net basis and the tenant is responsible for operating expenses as well as maintenance, providing for minimal landlord responsibility. The facility is designed for Tender Corporation to consolidate its three current manufacturing and warehouse facilities into one location, allowing for future growth/expansion.

Tender Corporation headquarters is located in the heart of the White Mountains in Littleton, New Hampshire. The company was founded in 1973, incorporated in 1977 and manufactures the world-famous insect bite treatment, AfterBite, a full line of well-known insect repellents such as Ben’s and Natrapel, first-aid such as Adventure Medical Kits and Easy Care First Aid kits, survival products with Survive Outdoors Longer and burn remedy products such as AfterBurn. Many of Tender’s products are packaged in innovative ways that allow them to be convenient to use as well as environmentally friendly.

Overall, this asset presents an opportunity for an investor to acquire a brand new, 117,250-square foot office/manufacturing center with an excellent tenant on a 10-year, double-net lease with minimal landlord responsibility. 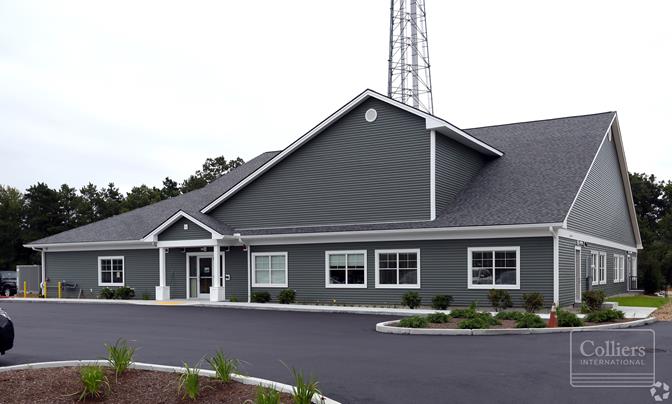 Colliers International is pleased to present to the investment community, 8 Thatcher Lane, located in Wareham, Massachusetts.

The United States Department of Agriculture (USDA) building is located at 8 Thatcher Lane in Wareham, Massachusetts. The 8,400 square foot building was built in June 2018 and is situated on 3.4 acres, which includes 1.6 acres for the building and an additional 1.8 acres of excess land which could be demised and sold separately as a pad site. This USDA building presents an opportunity for an investor to acquire a new, custom-designed building for this mission critical government agency. This new construction facility provides a very attractive risk-adjusted yield with a highly rated credit tenant with S&P AA+ designation. General Services Administration leases offer long-term stability to an investor as these federal agencies occupy the facilities for more than 30 years, on average, with a first-generation renewal rate of approximately 96%.