Atlanta has absorbed over 750,000 square feet YTD, continuing the strong absorption trend we have seen since 2013.

2019 in Atlanta has seen an emphasis placed on experience-based retail. New developments, both in the surging urban core and in multiple suburban centers, have had success selling experiences in mixed-use settings.

Entertainment is evolving. The modern consumer wants to stay longer, and is prioritizing walkability and options more than years past. Alpharetta's Avalon has seen this hypothesis bear fruit, and many other suburban locales, such as Gwinnett's Revel and Forsyth's Halcyon have looked to replicate its success. The Beltline, while very different from the aforementioned suburban center, is another example of successful experience-based retail, albeit in a different setting. It provides the consumer with a broad range of activities and options that could span an entire day, all walkable from each other.

Grocery is still the king of anchor tenants in Atlanta. Stores are quickly appearing in previous underserved markets such as Midtown. A new Kroger is set to open at New City's 725 Ponce project on the Beltline's Eastside Trail in October of 2019. The long-awaited store will include two "front doors", one of which will face the trail. Additionally, the largest Whole Foods in the southeast recently opened on 14th Street in Midtown.

Scott is the Director of Research for Colliers International in Atlanta, Georgia.  In his role, Scott supports all of the company's brokers in the Atlanta office.  He also manages the Research Associate in the company, and mentors an intern annually during the summer.

Scott began his real estate career in 2000 as a research assistant with Richard Bowers & Co., a local brokerage firm.  He joined Colliers International in Atlanta in 2003.  Scott specializes in aiding the company's clients with geographical, informational and analytical research.  With his extensive knowledge, he provides customized research data including:  market trends, lease and sales comparables, plats/ownership information, demographics, prospect information and economic information.  In addition to supporting the company's brokers and staff, his other responsibilities include compiling and writing quarterly market and submarket newsletters, maintaining the company's internal database of over 10,000 sales and lease transactions, and tracking news/trends related to Atlanta's commercial real estate market.  He is frequently called upon by local news sources for his knowledge and expertise of real estate matters in Atlanta.

Scott is a native of Atlanta, and enjoys spending time with his wife Lupe and daughter Sienna.  He is an avid golfer and loves vacationing with family. 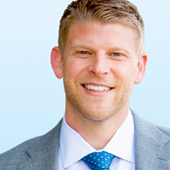 Tosh Wolfe is the Senior Vice President and Director of Retail Services  for Colliers International – Atlanta. Mr. Wolfe is focused on the strategic, operational and business development initiatives of the retail sector.  Under his guidance, the Atlanta Retail Services Group continues to set the standard for excellence in advisory service to owners, operators and tenants of Retail real estate assets. With an extensive background in leasing, asset management, development, acquisitions, dispositions, finance, and knowledge of retail, Mr. Wolfe enables his team to implement tailored solutions for all clients.

Mr. Wolfe began his career at PricewaterhouseCoopers providing audit and consulting services to global companies.  After a successful career at PricewaterhouseCoopers, Mr. Wolfe joined The Shopping Center Group as a Landlord Leasing Adviser, providing leasing and marketing services to his private and publicly traded clients.  Prior to joining Colliers, Tosh oversaw the regional leasing and asset management function at one of the largest Retail landlords headquartered in Georgia.

Mr. Wolfe is active in ICSC, ULI, The Commercial Board of Realtors and the Georgia Society of CPAs.  He values community involvement and enjoys mentoring students and guest lecturing.